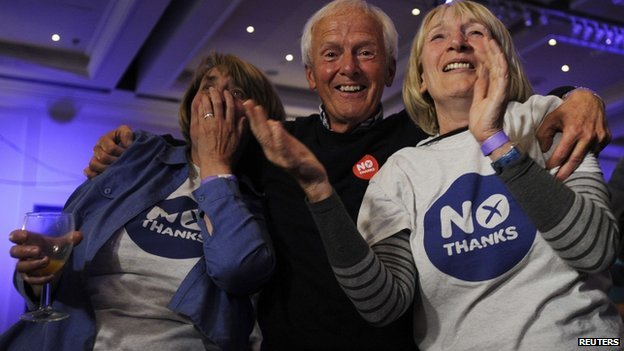 Scotland has voted to stay in the United Kingdom after voters said no to independence.

The Yes camp has had some victories, including in Glasgow and Dundee, but not enough to secure victory overall.

Talks will now begin on giving more powers to Scotland.

After weeks of campaigning across the country, Scottish voters made their decision yesterday by answering yes or no to the question: “Should Scotland be an independent country?”

It was the first time people aged 16 and 17 were allowed to vote in a UK referendum.

85% of people registered turned up to vote – a record high for an election or referendum.

The final margin of victory for the pro-UK Better Together campaign was 55% to 45%.

Scotland has been part of the UK for more than 300 years, so the vote was a huge moment for the country.

MPs from the three main political parties in Westminster say – even with a NO vote the result will mean big changes across the UK.

The leader of the ‘Yes’ campaign, Scotland’s First Minister, Alex Salmond, has accepted defeat and called on Westminster to deliver on their promise of more powers for the Scottish Parliament.

The Prime Minister of the United Kingdom, David Cameron, says he’s congratulated Alistair Darling, who is the leader of pro-UK Better Together campaign.