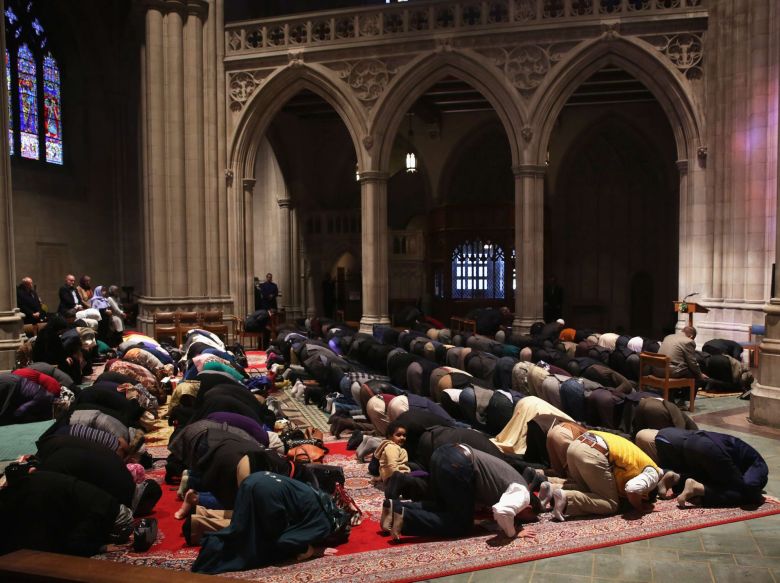 Muslim prayer rugs were laid and “the Arabic call to prayer echoed among the vaulted stone arches,” which the dean of the cathedral, the Very Rev. Gary Hall, called “a beautiful sacred language in a beautiful sacred space,” according to The Washington Post.

Welcoming the worshipers, director of liturgy Rev. Canon Gina Gilland Campbell said, “Salaam, shalom, peace. You are all so very welcome here.” She also used the occasion to issue an impassioned call for interfaith understanding, saying, “Let us stretch our hearts and let us seek to deepen mercy for we worship the same God.”

Christian and Muslim leaders also spoke about the need for religious dialogue and harmony, including South Africa’s Muslim Ambassador to the U.S. Ebhraim Rasool, co-organizer of the event. Rasool used the sermon, or Khutba, to call for the protection of Christians in the Middle East, as well as greater Muslim tolerance for other religions, saying: “I think that we must return to the Muslim prophetic tradition in which the Prophet, may peace be upon him, invited Christians to his own mosque that he established in Medina – and said to them, you can pray here.”

Islam is the third-largest religion in the United States, behind Christianity and Judaism, and with at least 2.6 million adherents, constitutes approximately 0.8% of the country’s population.