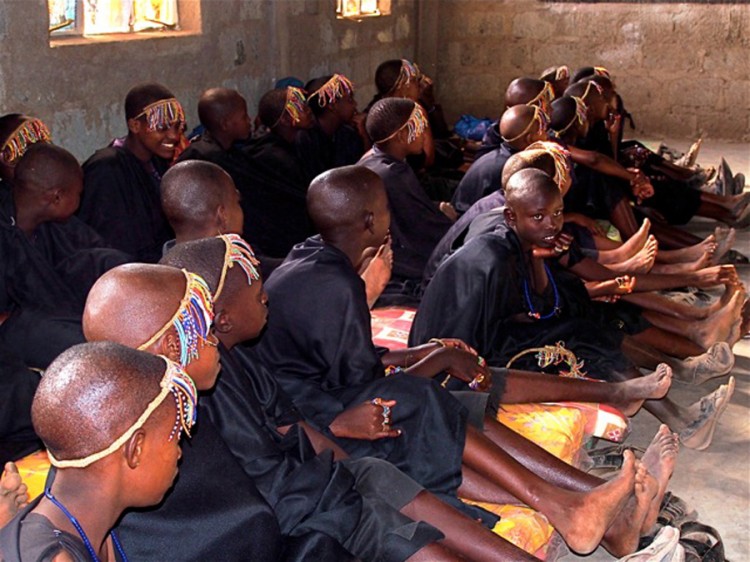 52 young girls of a Maasai village, including the chief’s daughters, recently took part in a new ritual (the Alternative Rites of Passage). They did not have to suffer the pains of excision, as their older sisters and mothers had. Instead, they had a new ceremony: they stayed for two days in their classroom, wearing traditional black dresses and colorful crowns, with three women who talked to them about what being a woman means.

Female circumcision, widely known as female genital mutilation, is illegal in Kenya and is punishable by law, yet it is still practiced in many villages. Many regions in Africa and some countries in Asia and the Middle East widely practice the ritualistic procedure.

Traditionally, young women who had not yet been circumcised were rejected in their villages. The women who had endured the procedure were considered acceptable members of society and suitable for marriage.

Instruments traditionally used to perform the cut are sharp metal tools, knives, and other crude objects, and the procedure is usually not carried out by trained medical professionals. The effects of excision often bring on medical complications, going from local infection to death.

The physical pain resulting from the practice has immeasurable psychological impact on these young girls.

The scars left by the cutting often leads to complications later when women give birth, causing sharp pains, rips and often making a caesarean section necessary.

As the suffering of young women continues to surface across the globe, studies and personal opinion continue to find no sensible reason for female circumcision, considering it to be an act of violence against women.

It is estimated that 100 million–140 million women and girls have already been subjected to some form of female genital mutilation.

“Female mutilation is against the law, but people are still dying from it,” said Ikoluba, a volunteer for the Campaign Against Female Genital Mutilation in New York City. “Just earlier this year, one girl died from the bleeding and her sister ran away.” She herself was excised when she was 13 years old. “I wanted to run away, but my mother assured me that I should not be scared. She said she would hold my hand and that I would be okay”. “I felt as if I were going to die. It was very painful to urinate after the cutting. I had infections and fever and lots of nightmares.”

If you want to read more, read the full article here: The Epoch Times.